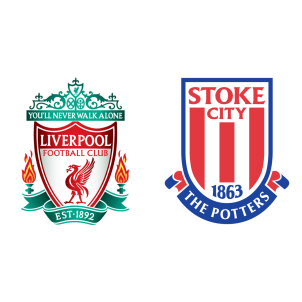 Liverpool are third in the league standings with seventy-one points. Although they drew 2-2 against West Bromwich Albion in their last game, Liverpool are likely to qualify for the UEFA Champions League next season. Their 5-2 win over AS Roma in the first leg means Liverpool can afford to take it easy this weekend to field a fresher lineup in the second leg next week.

Stoke City have not won any of their previous six games, and are nineteenth in the league standings with twenty-nine points, four points below the safety net for survival from relegation.

Joel Matip, Adam Lallana, Emre Can, Alex Oxlade Chamberlain miss out due to injuries while Sadio Mane is a doubt. The visitors will be without Lee Grant, Eric Maxim Choupo-Moting and Kevin Wimmer, all of whom are injured.

Liverpool have scored at least two goals in their last four matches against Stoke City in all competitions. Moreover, Jurgen Klopp’s side have kept a clean sheet in each of their previous three home league fixtures and are the clear favorites in this match.

A 3-0 win for Liverpool is the most probable result.