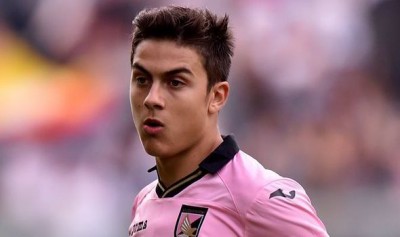 Juventus have completed the signing of highly rated youngster Paulo Dybala from Palermo, in a deal which will see the Sicily-based Serie A club earn €32 million. Palermo might also receive an additional €8 million in add-ons. The 21-year-old Argentine forward has signed a five-year contract with the Italian champions.

Dybala joined Palermo from his hometown side Instituto Atletico de Central Cordoba in April of 2012, with Maurizio Zamparini, the Palermo President dubbing him the “new Sergio Aguero”. Dybala has been a constant feature for Palermo ever since he made his debut against Lazio.

Having scored a cumulative eight goals in his first two seasons in Italy, Dybala had an incredible 2014/15 season scoring 13 goals and registering 10 assists in 34 Serie A appearances for Palermo. Dybala had captured the attention of a number of clubs, including Chelsea and Paris Saint-Germain. The Old Lady of Italian football, though, acted on their interest and snapped up the young forward.

At 1.79m, Dybala is short in stature for a centre forward, but technical ability and agility are the marked features of his game. An excellent dribbler with tremendous close control in limited spaces, Dybala’s link-up play has been appreciated by most football pundits.

Juventus have strengthened through unconventional but profitable means over the last few seasons and will contest for the biggest prize in European football tonight. With Carlos Tevez likely to depart at the end of the season, Paulo Dybala will form a lasting partnership along side Alvaro Morata, both of whose playing styles would complement Juventus and give the Turin-based side a devastating attacking threat.