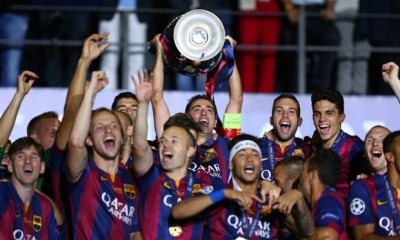 Barcelona lifted their fifth European Championship on a night which was testament to some breathtaking moments on pitch courtesy the Italian and Spanish champions. Barcelona captured the treble for the second time in six seasons, winning the final at Berlin 3-1 to cap off a brilliant first season under Luis Enrique.

Juventus started in a 4-3-2-1 with Carlos Tevez and Alvaro Morata up front. Arturo Vidal, Paul Pogba, Andrea Pirlo and Claudio Marchisio featured in the midfield. Andrea Barzagli and Leonardo Bonucci  formed the centre half pairing with Patrice Evra and Stephan Lichsteiner as the fullbacks.

Barcelona started the match being uncharacteristically sloppy in position, but gained control within mere minutes. Four minutes into the final, Ivan Rakitic put the Catalan side in lead, through an attacking move which involved all of Barcelona’s outfield players except Suarez. Andre Iniesta also achieved the distinction of assisting three different goalscorers in three different Champions League finals. Juventus seemed to go into a haze after that goal, as the world-famous defensive unit suffered lapses in concentration and Buffon had to come to rescue many-a-times. Even the usually composed Pirlo looked rattled with Barcelona’s all-round attacking threat.

Neymar influenced the most in first half, while Messi and Suarez played the supporting cast. In spite of Barcelona’s dominance, Enrique’s side went into half time with a solitary goal lead. Juventus seemed not to have learned from their mistakes going into half-time, as right after the second period of play started, Barcelona were 5-on-3 at one point in Juve’s penalty zone. Gianlucci Buffon saw away the danger once again.

The bianconeri finally instilled themselves onto the game as Alvaro Morata scored the all-important equalizer. The former Real Madrid man, latched onto the loose ball after Andre ter Stegen had saved the initial effort from Carlos Tevez. The tide of the match completely turned at that point with Juventus pressing with intent and creating quality chances. The Old Lady looked more likely of two teams to score the next goal, before Luis Suarez netted the winner, after Buffon rebounded Messi’s headed effort. Suarez’s goal alleviated the pressure off Barcelona and Neymar put all lingering doubts to rest with a brilliant strike, late into the stoppage time.

Xavi Hernandez, who eventually lifted the trophy, played a short cameo, as his Barcelona career came to an end at a sparkling high. Barcelona have once again established themselves as the best in Europe, resting on the laurels of Suarez, Messi and Neymar – undoubtedly the best attacking trio in world football at the moment.