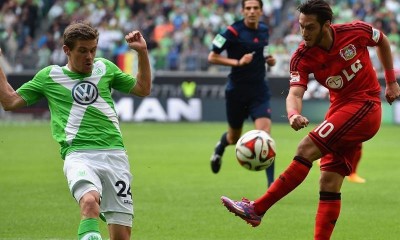 A cagey Bundesliga affair is set to happen between German giants Wolfsburg and Bayer Leverkusen at the Volkswagen Arena on Saturday. Wolfsburg have recovered from their sudden three-match winless run with two consecutive wins against Hoffenheim and Darmstadt. They now sit on fourth position with eighteen points. Bayer Leverkusen, unbeaten in the last five games, sit on sixth position and a single point behind their competitors tomorrow.

Bayer Leverkusen and Wolfsburg are among the candidates to win one of the three remaining Champions League spots this season, with runaway leaders Bayern well on the way to securing their qualification for the 2016-2017 season after winning the opening 10 games of the season.

Robin Knoche, Christian Trasch and Max Kruse are injured and will miss this particular fixture. Felipe Lopes is yet to regain complete match fitness and is unlikely to feature in the starting lineup. Sebastien Jung is competing with Vieirinha for the right-back position, while Maximilian Arnold provides Hecking with an additional midfield option.

Charles Aranguiz, Tin Jedvaj and Roberto Hilbert are the long-term absentees due to injuries for Bayer Leverkusen. Lars Bender has been listed as doubtful and will face a late fitness test. Julian Brandt and Hakan Calhanoglu are available to play as attacking impacts, but are inlikely to start.

Wolfsburg are undefeated in twenty seven of the last home matches in Bundesliga, winning their last five encounters at home against Bayer Leverkusen in all competitions. The last twelve matches at the Volkswagen Arena between these two sides in all competitions has resulted in a minimum of 2.5 goals on an average. Tomorrow promises to be a high scoring affair as well.

Two of the league’s finest attacking squads will face each other tomorrow and the winners will be a step closer to European qualification for next season. Based on current form, the fixture should be a draw, with 2-2 being the ideal scoreline.

“We’ve got a good and broad squad. The question is whether we’ll take any risks on Saturday.” – Dietaar Hecking, Wolfsburg.