Juventus vs Torino – Serie A – Preview 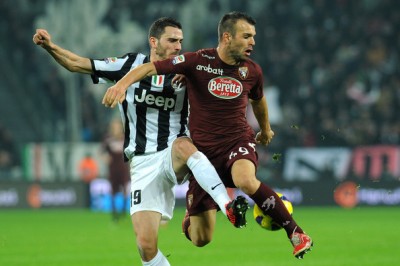 Juventus hosts Torino on Saturday, 30th October as the legendary club aims to bounce back from its unfavourable string of results. The Turin derby is one of the most anticipated Serie A clashes of the season and for the first time in many seasons, Juventus will be playing a Torino side positioned above them in the league standings.

Juventus sit on the 12th position in league table with 12 points while Torino are three places and an equal number of points ahead of the Old Lady. While Torino have not won their last four league matches, Juventus are coming off a 1-0 defeat at Sassuolo.

Roberto Pereyra, Kwadwo Asamoah and Stephan Lichsteiner will all be absent for Juventus owing to injuries. Giorgio Chiellini is suspended, which should force Maximiliano Allegri to adopt a 4-3-3 formation tomorrow.

“I am stunned, as I am the captain and it hurts my soul to see my team dominated like that, to see my team not realise how important this game is and what attitude to take.

There was also too much arguing with the referee. Talking about the referee all the time is what losers do and we do not stoop to that level. We wear the Juventus shirt and must do it justice.”

“We must rethink some things. We’ll go there [Juventus] with some players tired but I am sure that we will prepare for the game and contest it as a derby requires.”

Juventus have not lost at home in the derby since Torino completed a double over Juve with a 2-1 away win in April 1995, according to Head-2-Head statistics. The Scudetto holders are currently eleven points behind the league leaders and in spite of the season being long, it looks difficult for Juventus to make a comeback into the race for the Serie A championship.

Juventus have won their last four home matches against Torino in all competitions, while their opposition have lost their last three away games. On current form, Juventus should be able to emerge victorious, with a 2-1 scoreline being the most probable.