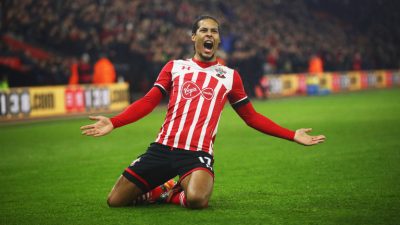 According to various sources in the English media, Virgil van Dijk has chosen to join Liverpool from Southampton instead of Manchester City or Chelsea.

The defender was Southampton’s best player this past season and have been a source of speculation for the entire time. While various clubs in England as well as abroad were linked to him at various junctures of time, it is now believed that Liverpool are the next likely destination of the Dutchman.

Liverpool’s defense has been a serious cause of concern for fans and pundits alike and one of the primary reasons why Jurgen Klopp’s side failed to mount a serious title challenge.

Virgil van Dijk joined Southampton from Celtic for £13m in 2015 and have been a regular in the Saints side since then. He has been one of the finest central defenders to have plied their trade in the Premier League in the recent seasons and is valued at an exorbitant £50m by the Southampton hierarchy.

The Dutch defender suffered an ankle injury in January which has not only kept him out since but also plagued Saints’ campaign in the business end of the season. Although van Dijk is expected to regain complete match fitness by August of this year, the next time he plays a Premier League game, it could be for his new club.

Jurgen Klopp’s project at Liverpool has attracted van Dijk’s attention and the fact that he will be the mainstay of defence at Anfield, as opposed to the competition for places in Etihad or Stamford Bridge seems lucrative for the 25-year old.

Virgil van Dijk could command a transfer fee of upto £60m, which would in turn help Saints fund their signings. All leading sources of English media, including the BBC is at a consensus that Virgil van Dijk has already agreed to personal terms with the Anfield-based club and it is only a matter of time until Southampton receives a concrete offer for their star player.