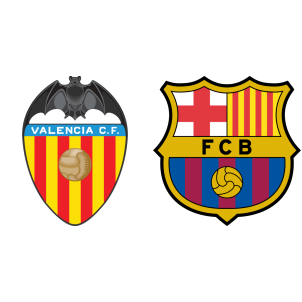 Valencia vs Barcelona – Valencia hosts Barcelona at the Mestalla Stadium on 26th November, Sunday in a crucial La Liga fixture.

Under Ernesto Valverde’s guidance, Barcelona have pulled ahead in the title race, remaining unbeaten so far across all competitions, and a win tonight will help them take a comprehensive lead at the top of the table.

Valencia have been one of the surprise contenders for the title this season, starting the season exceptionally well after their missteps in the recent years. They have won their last six league matches, including a 2-0 win over Espanyol in their last game.

Javi Jimenez and Jeison Murillo are sidelined through injuries for Valencia. The visitors have a lot of absentees with Gerard Pique suspended and Rafinha, Ousmane Dembele, Sergi Roberto, Andre Gomes and Javier Mascherano injured.

“Valencia are in the middle of a very good winning streak, and I was relatively surprised. I had expected them to have a big year, and I still expect them to do so. They have a good coach, they have good players, they have a clear plan, and they are working hard.”

According to Valencia vs Barcelona H2H Stats, Barcelona have won three, lost one and drawn one of their previous five encounters with Valencia.

Valencia have kept a clean sheet in five of their last six home matches in the La Liga and will be a formidable opponent for Barcelona, who have been pretty much unstoppable till now.

It should be a closely contested affair but a 1-0 win for Barcelona is the most likely result.