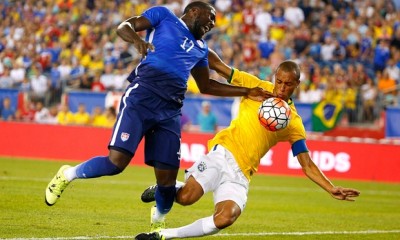 Jurgen Klinsmann’s USA fell to a crushing 4-1 defeat at hands of Brazil in the final preparation match before the qualifier for the 2017 Confederations Cup against Mexico in October. The sell-out crowd at Gillette Stadium witnessed a total lacklustre performance from the home side as the USMNT’s flawed gameplan was exposed by a convincing Brazilian side.

The US head coach started an experimental first eleven, which looked far from settled. Ventura Alvarado and Michael Orazco were the debutant centre-half pairing while Geoff Cameron and Tim Ream, who are natural centre-backs, started as fullbacks. Equally surprising was Alejandro Bedoya’s inclusion into the side as a defensive midfielder, which was a far cry from the wide midfielder’s skillset.

Brazil took advantage of Klinsmann’s team selection and pegged USA back into their own half right from the onset. Willian, who was arguably Brazil’s best player in the first half, ran behind the struggling USA defence early into the game and set up Hulk for a comfortable finish. Jozy Altidore had a great chance to equalize soon after, but failed to register his shot on target.

Although both teams went into half-time with difference of a solitary goal between them, Brazil doubled the lead after play restarted when Neymar was brought down in the 18-yard box after he had collected a long ball from David Luiz. Although Brad Guzan dived in the right direction for Neymar’s spot kick, he failed to keep the Barcelona man’s shot out. Maricio Rafinha added to Klinsmann’s troubles scoring a third at the 64th minute and Neymar scored another just three minutes later.

United States are going through one of their worst phases of recent years, as a football-playing nation and Jurgen Klinsmann must shoulder the majority of the blame. His tactical flaws and mis-management led United States to cap off the 2015 Gold Cup with their worst standing in fifteen years. Not only did the USMNT miss the final for the first time in the last six editions, but also lost to Panama in the third-place match.

Klinsmann had drafted in midfielder Michael Bradley, forward Jordan Morris and goalkeeper Sean Johnson into the national squad, but failed to use the resources at his disposal in an effective manner. As for Brazil, it was a fine portrayal of their creative flair as the likes of Neymar, Willian, Douglas Costa, Hulk all put up brilliant shifts.

The USMNT’s fans will be worried for their next match against Mexico in the next international break, as the struggling Jurgen Klinsmann has to come up with solutions to the insipid performance in a short time.