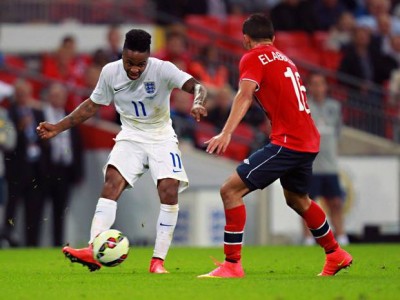 England will host Switzerland at Wembley on Tuesday in a Group E fixture of the UEFA Euro 2016 qualifiers. The Three Lions became the first team to qualify for next summer’s European championships courtesy a 6-0 victory over San Marino. Wayne Rooney equalled English legend Sir Bobby Charlton’s record of 49 goals in his nation’s colours with a first-half penalty and will aim to be the leading English goalscorer when he takes the pitch against Switzerland.

Michael Carrick had to withdraw himself from the national squad due to a calf injury. In Carrick’s absence, Jonjo Shelvey could start, after the Swansea midfielder made a promising start to the new season. Raheem Sterling should feature in the starting line-up. Against San Marino, both Harry Kane and Theo Walcott came off the substitute’s bench to score goals, and the latter is likely to start at Wembley as well.

For Switzerland, Josip Drmic and Valentin Stocker are expected to start. Xherdan Shaquiri could be awarded his 48th international cap.

England will wish to maintain their hundred percent record in qualification while Switzerland will be hopeful about their chances after they pulled off a remarkable late comeback against Slovenia, overcoming a two-goal deficit. According to Head-2-Head statistics, England have lost only one of their last ten encounters with Switzerland. England’s last loss at Wembley also dates back to 2007. Hence, England should win by a 2-1 margin, in spite of a closely contested affair.