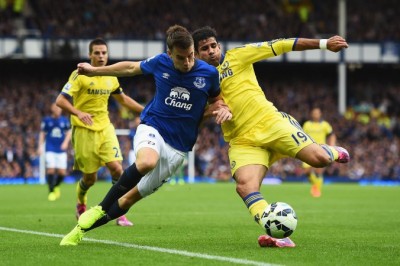 The English Premier League champions Chelsea travel to Goodison Park on Saturday to face Everton in the first match of the post-international break weekend. Chelsea have had a miserable start to the new season, taking just four points after the first four games. While the defense have struggled to keep shots out, Chelsea’s midfield has surprisingly failed to assert themselves on either end of the pitch. Everton, meanwhile, sit at the ninth position on the league table, winning one and drawing two of their completed fixtures.

The match promises a number of intriguing sub-plots as both clubs were embroiled in one of the transfer sagas of the year surrounding John Stones. While Chelsea kept increasing their bid and the young English centre-half even submitted a transfer request, the Everton board remained adamant in their stance of not selling the youngster this summer. The match could also see Ramiro Funes Mori and Baba Rahman making their Premier League debut for their respective clubs.

Roberto Martinez will be without several key players. Darren Gibson, Steven Pienaar, Leighton Baines, Tony Hibbert and Tom Cleverley will all miss through injuries. Bryan Oviedo and Brendan Galloway have also been listed as doubtful, but the former is expected to start.

Thibaut Courtois is unlikely to travel with his Chelsea teammates as the goalkeeper picked up a knee injury in training. Asmir Begovic will be the replacement in that case. Oscar has missed Chelsea’s last few games with an injury, but should make the matchday squad against Everton.

Although the London club has struggled to mount a worthy defence of their Premier League title until now, it is expected Jose Mourinho would soon stem the rot and Chelsea will play football equivalent of their standards. It should be a closely contested affair, with a 1-1 draw being the most likely result, in a stark contrast to the 3-6 scoreline during the corresponding fixture last season.