USA Begins CONCACAF Gold Cup With A Victory Over Honduras 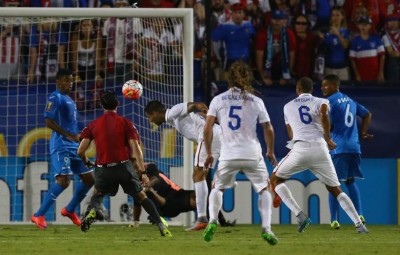 United States of America, the defending champions of the CONCACAF Gold Cup began the 13th edition of the tournament with a victory over Honduras at Toyta Stadium, Texas in the second Group A fixture on the inaugural day.

Two days after the USWNT secured the FIFA Women’s World Cup, the triumph of soccer continued on the coast of United States as a brace from Clint Dempsey secured a comfortable win for the USMNT. In the 24 year history of the Gold Cup, only once in 2000, did either US or Mexico failed to win the competition. The tradition looks secure with Jurgen Klinsmann’s men thumping their authority as a rising power in world football by following up wins in friendlies against Mexico, Holland, Germany and Guatemala.

In spite of concerns surrounding the US squad’s depth and tactical setup, Klinsmann has answered his critics time and again. Klinsmann has chopped and changed his squad roster in the last few months, yet the positive results have continued. Against Honduras, the team lacked cohesion in the first half, with neither Kyle Beckerman, Gyasi Zardes and Ventura Alvarado particularly impressing.

Honduras, unlike their performance in last year’s World Cup, started brightly, threatening Brad Guzan’s goal through a clever attacking move from Anthony Lozano. Jorge Luis Pinto’s side kept creating chances with Andy Najar going close. Klinsmann’s side soaked up all pressure and punished Honduras on the first mistake the defence made. The Honduras defense failed to clear a corner and after Jozy Altidore’s shot was saved by Donis Escober, the rebound fell to Clint Dempsey and the Texan buried it in front of the home fans.

DeAndre Yedlin failed to double the lead as Escober rushed off his line to keep Honduras in the game. In the second half, US settled down and grew into the game and Dempsey scored at the 63rd minute, nodding in a simple header off Bradley’s cross. This match was an opportunity for Dempsey to prove his mettle after he lost the national team’s captaincy and the former-Fulham striker grabbed it with both hands.

After the match, Dempsey conceded he is happy to contribute, in spite of not being the captain.

“I always approach the game the same, just go out and try and help the team win.”

Carlos Discua got a consolation goal five minutes after Dempsey completed his brace, but without much avail as Honduras weren’t allowed to get back into the game. The US next face Haiti near Boston on Friday, then last time’s beaten finalists, Panama, on Monday in Kansas City.