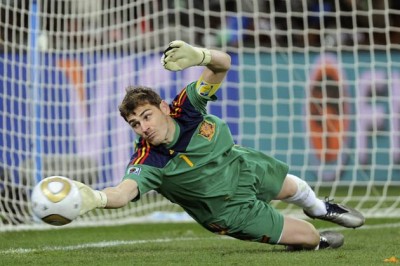 Iker Casillas’ time at Real Madrid is coming to an end, as the player’s agent confirmed the goalkeeper is looking for a move away from the La Liga club this summer, with FC Porto interested in his services.

A Castilla product, Iker Casillas was promoted to the first team squad at the age of 16. A first-team regular since 2000, Casillas has been on a downhill slope since Jose Mourinho’s third season in charge. His fall-out with the Portuguese manager played a crucial role in Mourinho’s eventual departure from the club.

The three times UEFA Champions League winner, who is also the captain of the Spanish national team has won numerous club and individual honours in his 16 years at the club. Although Casillas’ gameplay has seen mistakes cropping up in the last few seasons, he has been one of the safest hands in Europe for over a decade.

The hold-up between FC Porto and Real Madrid regarding Iker Casillas’ transfer has been mainly due to disagreements on Casillas’ enormous wages worth €7.5m. While Casillas wants the club to clear his wages worth the remaining two years’ contract and let him go as a free agent, Real Madrid is adamant to pay only the difference which Porto won’t pay.

In spite of minor hold-ups, the transfer should go forward in the next couple of weeks and Iker Casillas will be moving to a new destination.