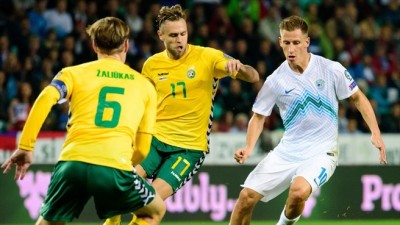 Ukraine will take on Slovenia in their sixth attempt to qualify for a major tournament through play-off, when they host the side which denied them participation in UEFA European Championship 2000 at L’viv Arena on 14th November, Saturday.

The last time these two sides met in the play-off of UEFA Euro qualifiers in November of 1999, Ukraine had suffered a heartbreaking loss through Milenko Acimovic’s wonderful goal, which had resulted in a 3-2 aggregate win in favour of Slovenia. That was Ukraine’s only play-off participation in the UEFA European Championships. Slovenia, on the other hand have won once and lost once in play-off till date.

Ukraine finished third in Group C behind European champions Spain and Slovakia, while Slovenia finished third in Group E. Both sides have a relatively healthy side with none of the players missing out due to injury. Ukraine will be without defender Olexandr Kucher and midfielder Taras Stepanenko, both of whom will sit the tie out due to suspensions.

Ukraine’s Artem Fedetskiy and Ruslan Rotan, alongside Slovenia’s Josip Iličić and Dejan Lazarevič are also one yellow card away from one-match suspension, and any caution in tomorrow’s match will result them missing out the return leg in Slovenia on Tuesday.

According to Head-2-Head statistics, Ukraine have never won any of its matches against Slovenia. Although Ukraine have the stronger side on paper, Slovenia are capable of causing an upset just like in 1999.

“Ukraine have a technically sophisticated and robust team. I have watched all of Ukraine’s qualifying matches. They conceded only four goals, that is amazing.”