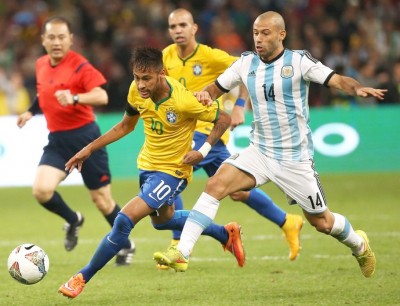 Argentina will host Brazil at the Estadio Monumental for 2018 FIFA World Cup qualification among the CONMEBOL. It is one of the biggest rivalries of world football, and the clash between the two South American giants will be even more eventful, as qualification to the FIFA World Cup to be held in Russia in 2018 is at stake.

Gerardo Martino, Argentina’s coach is under serious pressure, with his side taking just one point off the first two qualifier games. Injuries are also an issue for his squad, with Carlos Tevez joining Lionel Messi and Sergio Aguero on the sidelines due to a knee injury. Pablo Zabaleta and Ezequiel Garay have also been ruled out. In absence of arguably the first-choice attacking trio, Argentina are likely to start with Gonzalo Higuain (who is in tremendous form for Napoli), Angel di Maria and Ezequiel Lavezzi against Brazil.

Brazil have taken three points from the first two games, winning and losing one a piece. Although the Selecao can afford a negative result, they are still three points behind Uruguay, Chile and Ecuador who have all won their first couple of matches in the group.

All ten member countries will play home and away – while the top four earn automatic qualification to the 2018 FIFA World Cup, the fifth-placed country will enter the inter-confederation play-offs. Neymar will return to the Brazil starting line-up, after his misadventures during the Copa America, but Liverpool duo Roberto Firmino and Philippe Coutinho ave not been selected.

According to Head-2-Head statistics, Argentina have won 22 % of its encounter against Brazil till date, with 65% ending in a loss. This particular fixture is likely to be a draw, with 2-2 being the most probable scoreline.