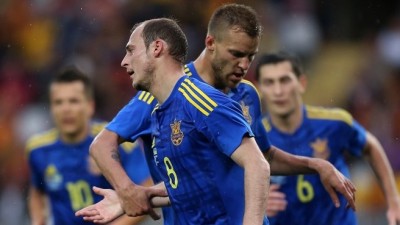 The European Championships are a fine amalgamation of successful footballing nations as well as countries which are still trying to formulate their hold in the footballing scene.

As the host nation, Ukraine had automatically qualified for Euro 2012. This time around, Ukraine qualified for UEFA Euro 2016 via the play-off route, the first time qualifying for a UEFA European Championship via the qualifying process, as it finished in third place in its qualifying group.

Since Ukraine broke away from Soviet Russia in 1992, the national football team’s biggest achievement was to reach the quarter-finals of the 2006 FIFA World Cup. The current Ukrainian set-up could very well emulate the Class of ’06 and even go further into the tournament.

The provisional squad for this summer’s competition was announced this past Sunday. Shakhtar Donetsk’s Andriy Pyatov is the first-choice goalkeeper with Denys Boyko (Besiktas), Mykyta Shevchenko (Zorya Lugansk) backing him up.

Ukraine has one of the most talented midfield squads with the likes of Taras Stepanenko, Maksym Malishev Ruslan Rotan, Yevhen Konoplyanka, Sergiy Sydorchuk, Andriy Yarmolenko making into the provisional squad among others.

Dnipro’s Roman Zozulya, VfB Stuttgart’s Artem Kravets and Zorya Lugank’s Pylyp Budkivskyi round up the forward line. Although the Ukrainian side does not boast of a star-studded forward line-up, Fomenko’s side is well capable of scoring the all-important goals.

There is no doubt whatsoever as far as Ukraine’s prowess in front of the goal is considered, with the Ukrainians netting the ball on four different occasions to bring an end to Romania’s fifteen match unbeaten run in an international friendly on Sunday. The defense remains a concern with the squad needing to avoid defensive mistakes and lapses in concentration, should they wish to progress deep into the Euros.

Drawn into Group C with the World Champions Germany, Ukraine will find it difficult to finish as the group winners. However, Mykhaylo Fomenko’s men have a realistic chance to make it to the knock-out stages with both Poland and Northern Ireland being in the same boat as they are.

One of the dark horses of UEFA Euro 2016, Ukraine are likely to surprise many a football fan this summer.