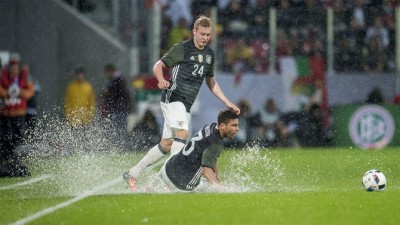 Germany, the reigning World champions, will look to emulate Spain and win the coveted UEFA European championship when Joachim Low’s side take the field against Ukraine on 12th June at Stade Pierre-Mauroy, Lille in their tournament opener.

One of the front-runners for the Euros, anything less than a semi-final berth would be a disappointing performance for the German side. While they qualified with absolute ease for this summer’s competition, Germany’s 3-2 loss to England in March and 3-1 defeat to Slovakia earlier this week proved Joachim Low has his work cut out during the Euros.

Joachim Low recognizes the level of difficulty the German squad will face in the upcoming Euros, considering their current status as the World champions. Although their recent form has been far from optimal, the German manager is hopeful his young squad will find it in themselves to make up for the absence of the now retired Per Mertesacker, Miroslav Klose and Philipp Lahm. Bastian Schweinsteiger, who has struggled with injuries for the majority of this year, is unlikely to play a role either.

“When other teams are up against the world champions, it’s their match of the year or even decade. They fight for every ball and they try to do something sensational. The World Cup took its toll on us too, with players suffering more injuries. We had to fight to make it through qualifying. What we lacked in qualifying was efficiency. Even in games we lost, we created a lot of chances but our finishing was poor.”

Midfielders Julian Brandt, Leroy Sané, Joshua Kimmich and Julian Weigl surprised many after the quartet were named in the provisional squad following exceptional performances for their respective clubs in the past season. The quartet were fielded together during Germany’s losing cause against Slovakia and at least two of them are likely to make the cut for the final squad.

The central defensive pairing of Jerome Boateng and Mats Hummels proved to be a success in Brazil and will prove to be crucial in Low’s tactical setup. The Germans tend to play without a central striker but the likes of Thomas Muller, Andre Schurrle and Lukas Podolski could very well rise to occasion, if needed.

Drawn into a group with Ukraine, Northern Ireland and Poland, the Germans are the firm favorites to finish as group winners.

“Yes, [Germany are one of the top contenders] but not the only one. In a tournament it’s important to have form and to keep it, avoiding injuries. You have to be in top condition, which is difficult. Every tournament is difficult, but it is fun. We’re looking forward to it.”