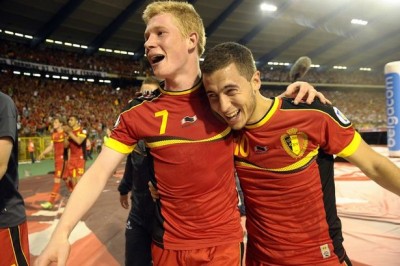 As the UEFA Euro 2016 inches closer and the final squads of each and every nation start to shape up, the consensus on one of the most exciting footballing squads in modern Europe has not altered – Belgium go into this summer’s European championship with their golden generation in the prime age for succeeding on the big stage.

The quarter-finalists of the 2014 FIFA World Cup, who lost to the runners-up Argentina, boast of one of the most diverse squads in Europe – from the solidarity of Axel Witsel and Radja Nainngolan in the deep midfield to the technical brilliance of Eden Hazard and Kevin de Bruyne in the attacking midfield, Marc Wilmot’s side has all the elements for success.

While questions were raised about the Belgian side’s temperament in Brazil, the squad has developed a winning mentality in recent times, if the qualification process was any indication. In a group which had both Wales (who are garnering a reputation of their own under Chris Coleman) and Bosnia-Herzegovina, Belgium topped with 23 points from ten games, losing only on one occasion.

Drawn into Group E alongside Italy, Republic of Ireland and Sweden, qualification for the knock-outs will not be a cakewalk for the Red Devils, but a quarter-final run is at least expected by the fans of the Belgium National Football Team.

“Just because people are crazy it does not mean I am as well. There are teams like Spain, Germany and France that have a lot of quality. We are among the outsiders like Italy and Portugal.”

Marc Wilmots, however, refuses to speculate on Belgium’s chances in this European championship which many observers believe, is just a stepping stone for a strong performance in the next World Cup in Russia.

Injuries have plagued the Belgian squad since the turn of the year, with Wilmots bereft of his captain and a number of other key defensive players. Nicolas Lombaerts and Dedryck Boyata were ruled out of playing in Euro 2016 through injury this past Monday. Lombaerts who was recuperating from a muscle tear was expected to replace Vincent Kompany, who was ruled out last month. Bjorn Engels withdrew as well with a groin injury.

Although Wilmots expressed optimism that he has “a defence with Toby Alderweireld, Jason Denayer, Thomas Vermaelen and Jan Vertonghen” Belgium’s manager would hope his side is not crippled by injuries any more.

If you fancy Belgium to win EURO 2016, you can submit your outright bet to Leo Vegas Sports.

With an abundance of riches in the offensive aspect of the game, Belgium, the unarguable dark horse of the Euro 2016 are expected to make a deep run into the knock-out phases of the tournament.