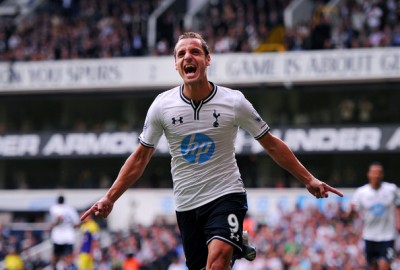 Roberto Soldado is set to return to Spain, after Tottenham Hotspur reached an agreement with Villarreal for the striker’s transfer. Roberto Soldado had joined Tottenham in 2013, in what was a record transfer fee worth £26m for Spurs back then.

Soldado failed to settle down in White Hart Lane and his time at north London was plagued by injuries and loss in form. The forward will leave Spurs after scoring only 16 goals in 76 appearances for the English side. Soldado was one of the best centre forwards of the erstwhile La Liga, regularly finding the back of the net during his time with Valencia.

A former Real Madrid youth player, the 30-year-old became a household name with his inspiring performances in the Valencia shirt, for whom he scored 81 goals in 140+ appearances. Soldado possessed all the qualities to succeed as an English Premier League striker, but never really got going. Having dropped down the pecking order due to Harry Kane’s rise to prominence, he seemed to have grown frustrated at the distinct lack of playing time last season. After seven goals in 52 league appearances, Soldado will hence leave White Hart Lane with disappointments, contemplating “what if” scenarios.

Villarreal will pay a transfer fee worth £10m to Tottenham Hotspur, and the centre forward is expected to sign a three year deal, once he clears the medical. Back in the comforts of La Liga, Soldado is widely expected to re-discover his guile and technique. Villarreal have already brought in Leo Baptistao on loan from Atletico Madrid and Jonathan Pereira from Real Valladolid and Roberto Soldado’s joining will provide the club adequate quality and depth at the centre forward’s position to delve through the La Liga and push for European qualification.