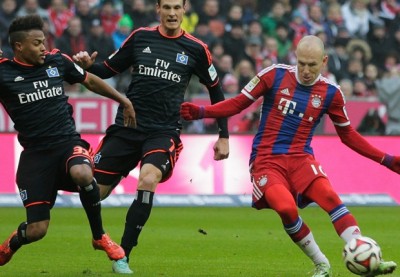 The Bundesliga returns to action on Friday as Bayern Munich welcome Hamburger SV at Allianz Arena to get their 2015/16 domestic season underway. The current Bundesliga champions will begin their trek to a fourth consecutive title, against the newly promoted club.

Hamburger’s promotion into the top flight of German football has been nothing less than a dream, but the Champions will be eager to stamp their authority on the relative minnow.

Franck Ribery, Jan Kirchnoff, Javi Martinez and Holger Badstuber will miss the season opener, with the players injured. New signings Arturo Vidal and Douglas Costa are expected to start, as will the likes of Thomas Mueller and Arjen Robben.

Hamburger SV have a relatively healthy squad, with only Jaroslab Drobny and Petr Jiracek ruled out through injuries. Marcelo Diaz is doubtful and will face a late fitness test. New signing Emir Spahic is expected to start at centre half.

According to Head-2-Head statistics, Bayern Munich have won a staggering 62 among their 104 encounters with Hamburger. Hamburger have conceded 31 goals in their last five visits to Allianz Arena and history is expected to repeat itself, with Bayern Munich likely to lose their season opener by a margin of 4-1.