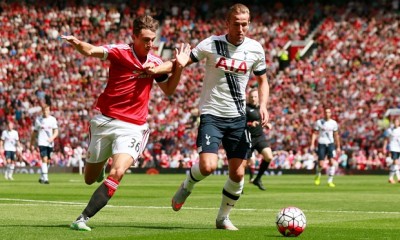 Tottenham Hotspur have maintained their stance regarding the future of their prized possession, thwarting Manchester United’s interests in Harry Kane. Reports emerged in May that Louis van Gaal would prefer to add the homegrown Harry Kane as Wayne Rooney’s understudy in his squad.

Manchester United have extremely limited options at centre forward, with the captain Wayne Rooney being the only striker proven in the top flight. The 22-year-old product of the Tottenham youth system is the perfect player in terms of ability and potential to be Manchester United’s final piece of the puzzle this summer.

However, Daniel Levy has made it quite clear that the north London club will not listen to any offers for Kane, however humongous they may be. Manchester United were believed to be spending upwards of £30m to land Kane, but are looking elsewhere after Tottenham turned down their enquiry about the English international.

Kane made his Spurs debut in the 2012/13 season, after loan spells at various English clubs like Leyton Orient, Milwall, Norwich and Leicester City. Although Kane did not have spectacular loan spells at any of the above mentioned clubs, he came into his own and played the role of an impact substitute for Spurs in the 2013/14 season scoring 4 goals. Harry Kane scored 21 Premier League goals last season, en route to becoming the PFA Young Player of the Season. Kane is a clinical finisher in front of the goal, other than possessing quick feet and a penchant for precise passing. Probably the best young English centre forward (Kane single-handedly carried Spurs last season), Harry Kane has all the qualities to succeed for a club like Manchester United.

“When we can buy another striker, who has a lot of qualities, more than our players, then we buy.” – Louis Van Gaal

Van Gaal has publicly expressed his admiration for Harry Kane and is expected to offload Javier Hernandez (who spent the 2013/14 season on a loan at Real Madrid). The fact that Spurs are interested in the West Bromwich Albion striker Saido Berahino while they are close to a £10m deal for the Lyon forward Clinton N’Jie, who can play up front or on the right wing, played into the speculations.

Historically, Spurs have been able to hold on to a player they wish to have in their squad, but should a bid unsettle the young forward, Daniel Levy may have to rethink his plans for keeping Harry Kane at White Hart Lane.