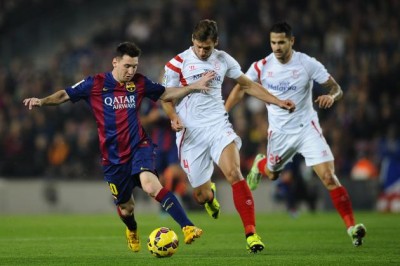 UEFA Champions League winners Barcelona will take on UEFA Europa League champions Sevilla for the UEFA Super Cup at Tbilisi, Georgia on Tuesday. While Barcelona have set their sights on a record-equalling fifth UEFA Super Cup, the Sevilla manager Unai Emery will aim to scalp his first win over the Catalan club.

For Barcelona, Jordi Alba and Douglas are confirmed absentee with hamstring injuries. Neymar has been suffering from mumps and will be rested, while Adriano is in a race against time to recuperate from his thigh strain.

Sevilla have been struck with a bout of gastroenteritis, with the stomach flu ruling out N’Zonzi out of action and rendering Rami and Kolodziejczak doubtful. Carrico will also miss the encounter with a muscle injury, as will Pareja due to a cruciate ligament injury.

“This is our first official match of pre-season and it’s a nice test to see where we’re at. Every title is a challenge and we’ll tackle this one as we would any other. We know our rivals are tough opponents as it’s always difficult to beat them. It’s exciting to be playing in the Super Cup; we know we have to play well in order to win.

Sevilla have even fewer players available than Barça so it’s a problem that both teams will have to overcome. There’ve been a lot of transfers at Sevilla and that’s harder for the Sevilla coach to deal with. In my case, we’ll be seeing things which are fairly similar to previous seasons.”

“It’s another opportunity we want to make the most of. We’re playing major rivals who are favourites but we have many things in our favour and we’re working on our strengths to overcome Barcelona. We want to take advantage of this moment – we’re at the level where we want to be, at the very top.

We need to be able to attack and profit from any weak moments or lack of cohesion in their game. Barça are going to be better than us in stats, possession etc. So we need to accept that and respond by countering very quickly against them. We have to grasp the opportunities when we have a degree of control.”

William Collum of Scotland is the designated match official.

According to Head-2-Head statistics, Barcelona have won 56% of their games against Sevilla and the La Liga holders are expected to defeat Unai Emery’s side by a 3-1 scoreline.