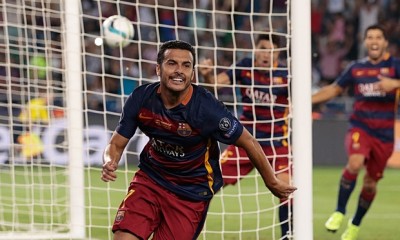 Barcelona won their fifth UEFA Super Cup at Tbilisi, after the UEFA Champions League winners defeated Sevilla 5-4 after extra-time. The highest scoring affair ever since the Super Cup became a one-off fixture, the match exhibited goals of the highest quality.

Sevilla opened scoring after only three minutes when Ever Banega dispatched a free-kick into the net, leaving Marc Andre Ter-Stegen looking in disbelief. Javier Mascherano had fouled Jose Reyes almost 20 yards from goal, and Sevilla grabbed the opportunity with both hands. Lionel Messi soon equalized with a similar free kick, as Beto failed to read the curve of the ball in time.

Messi’s second goal at the 15 minute mark was even better, with his shot finding the bottom corner from a 30 yard free-kick. Barcelona were leading 2-1 and stamped their authority on the game. Stringing quick passes and attacking down the flanks, Ivan Rakitic and Luis Suarez led Barcelona in pushing Sevilla back. The Uruguayan had a goal ruled offside, but set up Rafinha a minute before the half-time, with a brilliant nutmeg pass beyond Michael Krohn-Delhi, after Beto had saved his initial effort.

The match seemed to have tilted completely in Barcelona’s favour when Luis Suarez finally netted the ball after Benoit Tremoulinas and Sergio Busquets combined to create a fluent attacking move. Just as it looked like Barcelona would totally rout Sevilla, Unai Emery’s side lived up to their billing, by making a comeback from 4-1 down.

Vitolo made a surging run through the left and crossed into the box, where unmarked Reyes volleyed it past Ter-Stegen at the back post. The goal did not bother Barcelona as they continued to mount attacks, Ivan Rakitic drawing a clever save off Beto and Rafinha hitting the bar. However, wheels were churning on the other end. Jeremy Mathieu brought down Vitolo and Kevin Gameiro buried the resulting penalty.

Suddenly Sevilla were in touching distance of Barcelona and soon Ciro Immobile and Yevhen Konyoplanka combined, for the latter to score, thus showcasing a breathtaking comeback. Messi almost scored the winner with another exquisite free-kick, but it was inches above the bar.

The start to the extra-time was a quite one for both teams, in a remarkable contrast to the rest of the match, but Pedro spared Barcelona any blushes, scoring his 99th goal in the Catalan shirt, after Beto had parried away Messi’s strike. The forward, who have been repeatedly linked with a move to Manchester United, won Barcelona their fifth UEFA Super Cup and left Sevilla with a scenario of ‘what ifs’. Sevilla had a couple of late chances to equalize, but Barcelona held on for a memorable early-season win.