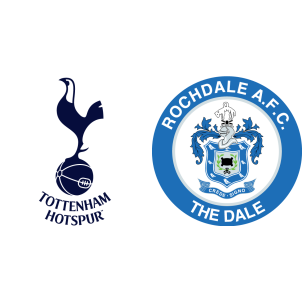 The 5th round FA Cup match at Crown Oil Arena ended in a 2-2 draw resulting in the need of this replay at Wembley. Tottenham Hotspur are having a decent season – they are placed fourth in English Premier League and have an excellent chance of progressing to the quarter-finals of the UEFA Champions League after their 2-2 draw at Juventus in the first leg.

Rochdale currently sit at the bottom of League One table and although they have played as many as four fewer games than most other clubs, they are one of the favorites to get relegated to fourth division.

Jan Vertonghen and Toby Alderweireld are unlikely to feature after missing the previous game. Rochdale will be without the injured Niall Canavan, Keith Keane, Steve Davies, Calvin Andrew and the cup-tied Scott Wiseman, Sam Hart, Mihai Dobre and Billy Knott.

“It’s an important game for us. If we want to go to the next stage of the FA Cup, we must win. The competition is so important for us and, of course, we want to go far, so it’s a great opportunity to have the replay.”

According to Tottenham Hotspur vs Rochdale H2H Stats, the only previous meeting between these two clubs ended in a draw. Tottenham have scored at least 2 goals in eight of their last nine FA Cup matches. A 2-0 win for Tottenham Hotspur is the most likely result.