← Why Spain will not win World Cup 2018
France vs Argentina: Who will Survive? → 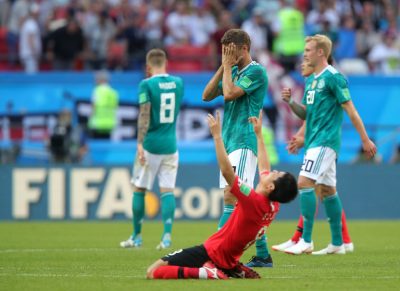 This 2018 World Cup has been a thing of a fairy tale for some teams and a nightmare for others. According to pundits Germany was among the favorites to win the 2018 World Cup but that has not been the case. We have seen big teams in the competition waver in performance and Germany is among the first of those to bow out. The results have brought to light how the group stage could be the best trap for testing the skills and experience of the stronger teams.

South Korea hammered Germany 2-0 ending Germany’s journey in the 2018 World Cup competition. This is an unfamiliar position for Germany as they have always managed to cruise through this group stage effortlessly for the past 80 years.

Could this mean that the defending champions cannot handle the pressure of defending their title or is the group stage trap a curse that precedes the World Cup winner? Either way the floor is open for another country to rise and take the seat at the top of world football. I believe that more surprises are yet to come in the 2018 World Cup competition, so we better brace ourselves and enjoy the wild ride.