Sweden Are UEFA Euro U21 Champions 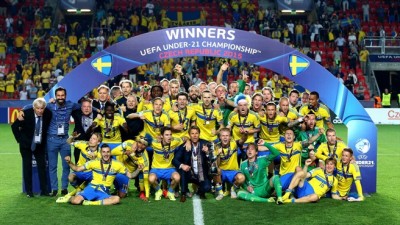 Sweden won the 2015 UEFA Euro U21 championship after defeating Portugal 4-3 on penalties, following a 0-0 stalemate after extra time at Eden Stadium in Prague, Czech Republic. It is Sweden’s maiden Euro U21 title and Håkan Ericson pulled off a miraculous feat, considering Portugal’s firepower.

Sweden, similar to most of its fixtures in the Road to Final, soaked up the early pressure and ensured Portugal did not get a look in through their defence. Minutes after Ricardo found the side netting, Sérgio Oliveira’s free kick hit the post from 20 metres and things started looking ominous for Rui Jorge’s side. Portugal would go on to hit the bar for as many as three times throughout the course of the game.

William Carvalho was Portugal’s most influencing player, weaving his magic alongside Bernardo Silva. It wasn’t to much avail though as the Swedish defence held firm with Oscar Lewicki putting in an exceptional shift in the centre of the park. Sweden themselves created chances through Kiese Thelin’s header and Simon Tibbling’s shot in the first half, but both were comfortably saved by Jose Sá.

Close to full time, Sweden almost worked their ‘late magic’ and scored via John Guidetti, but Sá produced a save to keep Portugal in the game and send the match into extra-time. Both teams played out a cautious 30 minutes after normal time, with neither looking to risk safety for a chance at killing the game. Sweden had the upper hand through most of the phase, with Abdullah Khalili’s shot inches wide off the post. As has been the case through most of the tournament, Sweden came into their own as the game progressed and Portugal, who have been the epitome of creative flair during their time in Czech Republic, look lost for ideas.

“It’s like a fairy tale and it’s incredible. Portugal are a fantastic football team who play great football. We prepared well for lots and lots of situations.” – Håkan Ericson

“For us at the moment it feels unfair because we did everything in our power to win. It’s natural we feel like this.” – Rui Jorge