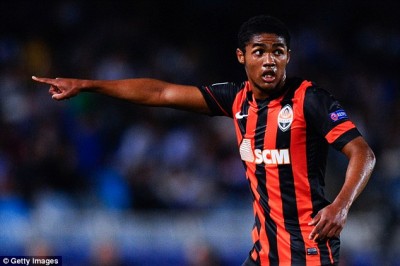 Bayern Munich have completed the signing of Douglas Costa from Ukrainian side Shakhtar Donetsk. The reported fee is €30 million.

The 24-year-old Brazilian was linked to Chelsea for the greater period of last season and expressed his interest in moving to a club competing for the top European honours. Bayern Munich enquired about Costa in the last month and last week, Mircea Lucescu, the Shakhtar manager confirmed a deal was close with the Bundesliga champions.

The 2014/15 UEFA Champions League semi-finalists announced the signing on Wednesday morning, once the summer transfer window officially opened. Douglas Costa, according to the club’s press release, has signed a five year contract which will keep the attacker at Allianz Arena until June 2020.

“Douglas Costa will be good for our team. he has great technical ability, a powerful left foot, he is very agile and extremely quick. After playing in Brazil and Ukraine, Douglas Costa has decided to take the next step in his career in the Bundesliga and at FC Bayern Munich. We will support him in every respect as he does so.” – Matthias Sammer, Bayern Munich Sporting Director

Guardiola, who came under fire, after Bayern failed to improve on their 2013/14 performance and stuttered in Europe, has been looking to bolster his squad which already has an abundance of attacking-minded players in Franck Ribery, Arjen Robben, Thomas Muller, Mario Goetze.

Douglas Costa has won the Ukrainian Premier League five times with Shakhtar Donetsk and represented Brazil in the on-going Copa America. Here is what Bayern’s new recruit had to say regarding his transfer:

“A dream has come true for me today. I’m proud to become a player for Bayern, following in the footsteps of so many magnificent Brazilian players. I’m looking forward to playing for this magnificent team and will do everything I can to fulfil the expectations placed in me.”

Douglas Costa will commence training with his new team-mates on 11th July, 2015.