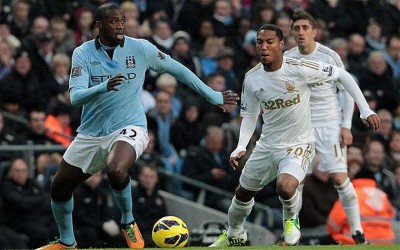 In the penultimate game of the 2014/15 English Premier League season, Manuel Pellegrini’s Manchester City will travel to Wales to play Swansea. While City are trying to lock down the second place in the league table, Swansea sit cozy at their best-ever eighth finish.

Garry Monk will miss a number of key players through injuries, including Tom Carroll, Kyle Naughton, Wayne Routledge, Jordi Amat and Nelson Oliviera. Manchester City have a relatively clean bill of health, except for Samir Nasri who will be absent due to a groin problem.

Swansea prefer a 4-3-3 with Jonjo Shelvey, Jack Cork and Ki Sung-Yueng in the midfield. Bafitembi Gomis came off the substitute’s bench on Monday to score the winner against Arsenal and may start up front tomorrow. He will be supported by Jefferson Montero and Gylfi Sigurdsson on either flank. Ashley Williams and Federico Fernandez, the centre-back pairing is key to Swansea’s defense.

Manchester City have mostly lined up in a 4-2-3-1 throughout the course of the season. Yaya Toure might start instead of Frank Lampard, in the hole behind Sergio Aguero. David Silva and James Milnet will be on his either side, but the task of providing width to the City side will rest upon the fullbacks Aleksandar Kolarov and Pablo Zabaleta. Fernando and Fernandinho will be in the holding midfield. Captain Vincent Kompany might have to remain satisfied with another stint on the bench as Pellegrini is unlikely to change his starting centre-halves Elaquim Mangala and Martin Demichelis.

Manchester City are the favourites to nick a 2-1 win here.