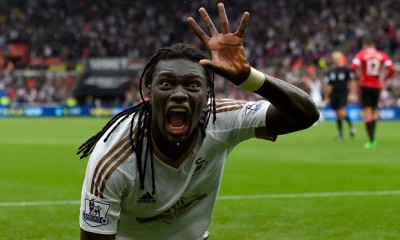 Swansea City pulled off a win against Manchester United at Liberty Stadium after goals from Andre Ayew and Bafetimbi Gomis helped the Swans secure a 2-1 result. It was Swansea’s third straight win over Manchester United as Louis van Gaal could not break his trend of losing to Garry Monk.

Both Swansea and Manchester United lined up in 4-2-3-1 formation. For Swansea, Bafetimbi Gomis started up front with Wayne Routledge, Gylfi Sigurdsson and Andre Ayew in the attacking midfield. jack Cork and Jonjo Shelvey were the deep midfielders with the usual backline of Kyle Naughton, Federico Fernandez, Ashley Williams and Neil Taylor.

Wayne Rooney started as the centre forward for Manchester United after his hattrick against Club Brugge in the midweek. Memphis Depay and Juan Mata manned the flanks with Ander Herrera as the central playmaker. Morgan Schneiderlin and Bastian Schweinsteiger started in the double pivot with Mateo Darmian, Chris Smalling, Daley Blind and Luke Shaw rounding up the defense.

Manchester United started brightly as Schweinsteiger and Schneiderlin took control of the midfield. United threatened the most in the first twenty minutes, but failed to produce the final ball, which could have given them a goal to peg Swansea back. Juan Mata put his shot wide after a Memphis Depay free-kick was saved by Fabianski and he was set up by Ander Herrera. Mata’s miss was a sign of things to come.

Minutes later Wayne Rooney had the best chance of the match when Luke Shaw’s pass bypassed the Swansea midfield and reached the Manchester United captain. His indecisiveness cost United dearly as Swansea would stem the threat. It was a continuing trend through the entire ninety minutes, as Rooney failed to put away or create chances, in what was a comically sub-par performance.

Manchester United took the lead through Juan Mata, three minutes after the second period of play started. Garry Monk changed his team’s set up into a midfield diamond and it worked wonders for Swansea. The Swans began to threaten more with Gomis and Ayew up front.

Manchester United’s goalkeeping situation has been a sore aspect throughout the summer. Sergio Romero’s ineptitude at the highest level came into forefront again as Manchester United let in two totally avoidable goals – initially from Ayew and later by Gomis’ shot. Ayew’s pass for Swansea’s second goal, was spectacular. Louis van Gaal responded by throwing Marouane Fellaini into the mix, but United failed to breakthrough the Swansea defensive organization.

Manchester United have suffered their first defeat of the season and Swansea seem to have one of the strongest squads in the league for now. As the Swans climb up to 4th place, what is certain is that the 2015/16 English Premier League season will be the most intriguing of recent years.