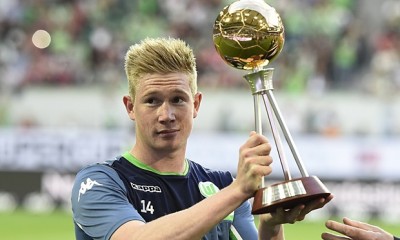 Kevin De Bruyne is all set to join Manchester City from Wolfsburg for a fee reportedly in the region of £52m. The Belgian attacking midfielder was consistently linked to Manuel Pellegrini’s team for most of the summer, and the deal has reached advanced stages, with official confirmation set to come in soon.

Wolfsburg had purchased Kevin de Bruyne from Chelsea for a fee of £18m and is set to make a profit worth double the initial fee, after the Belgian developed into one of the most sought after attacking talents in Europe. Kevin de Bruyne was adjudged the Bundesliga Player of the Year in 2014/15 season and was a crucial factor behind Wolfsburg’s second place finish last season.

“We’ll have another player who’s dangerous, who can score goals and who is really efficient.” – Vincent Kompany.

Manchester City have made a fiery start to their 2015/16 season, winning all four Premier League games in convincing fashion. In addition to Raheem Sterling and Nicolas Otamendi, the 24-year-old de Bruyne was Manchester City’s prime target in order to build a squad capable of challenging for the UEFA Champions League.

Wolfsburg were reluctant to sell Kevin de Bruyne, but Klaus Allofs, Wolfsburg’s General Manager admitted they would not be able to match the personal terms offered by the English club. Kevin de Bruyne is expected to earn around £250,000 per week at Manchester City.

Wolfsburg have already agreed a fee with Schalke for Julian Draxler, whom the Wolfsburg fans feel will be a perfect replacement for the departing Kevin de Bruyne.