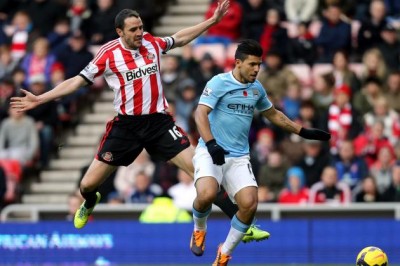 While Manchester City started extremely strongly in the Premier League, they have stuttered in the past week, losing against Juventus and West Ham, defeats which have raised questions among fans and pundits alike. Sunderland, meanwhile, have made yet another disastrous start to their campaign. Their 2-0 loss at AFC Bournemouth in the past weekend took them to the bottom of the league table and it appears that this will be another long season for the Black Cats, when they will struggle spectacularly.

Younes Kaboul is suspended for Sunderland after being sent off at Bournemouth at the weekend. Skipper John O’Shea, who missed that trip through illness, is available, but Adam Matthews (ankle) is still out.

Eliaquim Mangala is a doubt for City after being taken off against West Ham and David Silva has a calf problem. Vincent Kompany is unlikely to be risked as well. Pablo Zabaleta could feature in the matchday squad, as the Argentinian is close to returning from his month-long knee injury. Young forwards Kelechi Iheanacho and Patrick Roberts could feature, as could Spanish full-back Pablo Maffeo.

“We’ve got to pick ourselves up now. We’ve got two big games coming up this week. It’s one step forward and two steps back at the moment, but we’ve got to keep plugging away. We’re home against Man City so hopefully we can do something good there.”

“In the last two games we didn’t play with the concentration or intensity we had shown in the first five games. It was a difficult week with the Champions League and then losing today [Saturday]. There’s a long time to go and we must show a good reaction on Tuesday.”

According to Head-2-Head statistics, Manchester City have won 48% of its matches against Sunderland. Although Pellegrini will not have his strongest eleven at his disposal, Manchester City are likely to win with a 3-0 margin.