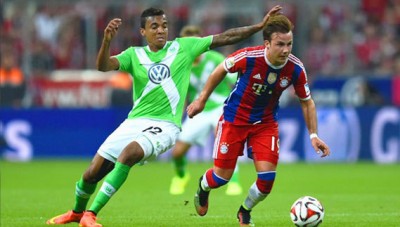 Wolfsburg come travelling to Munich this Tuesday as the encounter between the German Cup holders and the current Bundesliga champions promises to be the most anticipated European football fixture of the midweek. Bayern Munich are on an absolute high after two consecutive 3-0 victories in the league, with a hammering of Olympiakos sanwiched in between. Yet tomorrow, Pep Guardiola’s side will face its toughest challenge of the season, which is still in its early days.

Dieter Hecking’s young squad is unbeaten and will be high on confidence. Wolfsburg finished runners-up in the Bundesliga last season, ten points behind the Bavarian club. In spite of Kevin de Bruyne’s sale in the summer, the club has relatively strengthened in the summer. However, its abysmal record at Allianz Arena stands in the way – seventeen losses and one draw till date with Bayern Munich scoring a mammoth 42 goals as opposed to Wolfsburg’s 17 in all ties.

Wolfsburg will be without Koen Casteels, Robert Knoche, Vieirinha and Felipe Lopes. Christian Trasch will start at right back position. Should Luiz Gustavo fail to clear his fitness test, Maximilian Arnold will start in his position. Dieter Hecking has recently expressed some concern over Bas Dost’s attitude, but the centre forward is likely to start the crucial fixture.

According to Head-2-Head statistics, Wolfsburg have won only 13% of its matches against Bayern Munich. It should be a closely contested affair, with Bayern looking to dominate possession and Wolfsburg trying to hit the Bavarians on counter. However, on current form of both clubs, Bayern Munich should win with a probable margin of 2-1.