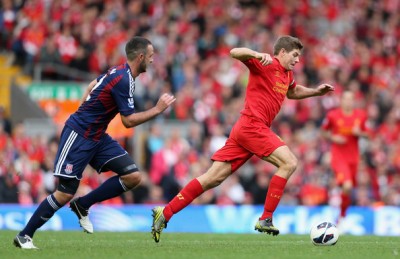 The final matchday of the 2014/15 Premier League season will get underway at the same kick-off time across the country. Stoke City will host Liverpool on the final day of the season, as Steven Gerrard will make his last appearance for the Kops.

Bojan and Victor Moses are unavailable for Stoke City through injuries. Asmir Begovic is available, but Jack Butland might start ahead of him. Brendan Rodgers will be without the services of Daniel Sturridge and Jon Flanagan, both of whom have been sidelined for some time. Mamadou Sakho, although not injured, is yet to regain match fitness and is unlikely to be a part of the matchday squad.

Jack Butland may start in goal for the Potters after two consecutive clean sheets in the last two starts. The rest of the starting XI may remain unchanged as well from the draw against Burnley. Erik Pieters and Geoff Cameron will be the fullbacks while Marc Muniesa and Ryan Shawcross form the centre back pairing. Glenn Whelan and Steven N’Zonzi are the holding midfielders while Marko Arnautovic, Charlie Adams and Jonathan Walters will play in the attacking band in Stoke’s usual 4-2-3-1 formation. Mame Diouf will start up front.

Steven Gerrard will start in the midfield alongside Jordan Henderson and Jordon Ibe. Raheem Sterling may get dropped in face of his recent contractual situation. If that is the case, Philippe Coutinho and Adam Lallana will be tasked with creation of chances while Mario Balotelli may get a run-out up front. Emre Can, Martin Skrtl and Dejan Lovren will form the backline in Liverpool’s 3-4-2-1.

Steven Gerrard would love to finish his Liverpool career on a high, but Stoke City may spoil the party. The match is likely to end in a 1-1 draw.