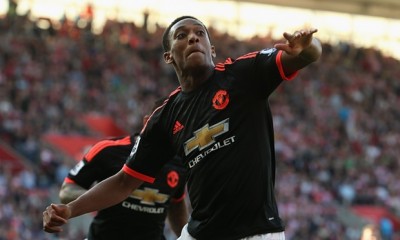 Manchester United pulled off an impressive comeback victory over Southampton, relying on Anthony Martial’s brace as the final scoreline read 2-3 in favour of the away side.

Manchester United were coming off a surprising 2-1 loss at the hands of PSV Eindhoven in the UEFA Champions League in midweek and Louis van Gaal needed his side to make a strong statement this weekend. The start to the match defied United’s intentions though as the United backline struggled to cope with Southampton’s pace and technique up front.

United fell behind early into the game with Sadio Mane orchestrating the attacking move. His pass from deep found Ward-Prowse on the right and he made a clever run into the box to get on the other hand of the Englishman’s cross. Although David De Gea saved Mane’s shot, the rebound fell to Pelle who made no mistake in netting the goal.

Southampton were undeniably the better team in the entire first half, but a mistake cost them dearly and allowed United to get back into the match. Mata, arguably from an offside position set Anthony Martial up who continued his string of scoring goals. The £36m signing has proved to be a revelation in his early days for Van Gaal’s side and today was no exception. His uncanny ability to finish clinically shone through once again in the second half as Maya Yoshida gifted the ball to Martial with a terribly under-weighed backpass which allowed United to take the lead.

Southampton began to self-destruct as United probed and prodded forward. As Ronald Koeman’s side began to unravel, Manchester United scored their third through Juan Mata after Memphis Depay’s excellent work on the left wing. The match was far from over though, as Southampton got back into the match with a second goal from Graziano Pelle. The Saints failed to complete a comeback though as David de Gea denied them with a couple of fine saves.

It was far from a perfect performance from Manchester United’s perspective, but the Red Devils held on when it mattered the most. Three points will lift Louis van Gaal’s side into the second position on the league table and provide the team with the necessary impetus to push further forward for the league title.