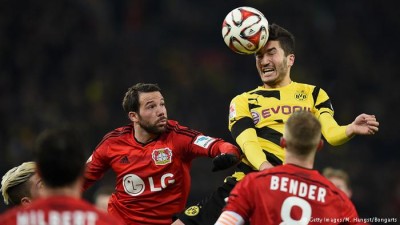 Borussia Dortmund will host Bayer Leverkusen in one of the most anticipated Bundesliga fixtures of the weekend. Dortmund, under the managerial reigns of new boss Thomas Tuchel have made an unbeaten start to the new season. Top of the points table after four matches with convincing wins in each and every game, Dortmund may feel fatigue creeping into the side as Europa League got underway this past week. Bayer Leverkusen have made a mixed start to their season, winning the first two games but losing the next two against Bayern Munich and Darmstadt.

Nuri Sahin and Erik Durm are the confirmed absentees for Dortmund, while Marco Reus has been listed as doubtful. Bayer Leverkusen will be without Tin Jedvaj, Omer Toprak and Charles Aranguiz. Should Lars Bender (knee injury) miss the match as well, Kevin Kampl will start in centre midfield.

“We’re on the right track at the moment, though: we’re focussed, working hard and desperately want to succeed.  We know it’s difficult to maintain the high level we’re playing at, however, and so we want to make sure we keep a comfortable cushion over our rivals and remain in the Champions League places for as long as possible.”

“Dortmund are a very strong side capable of bringing a lot of depth into their game with a high tempo. They are currently trying to retain possession to create even clearer goalscoring opportunities but this side have been known for their pressing and ability to switch play for years. We’ve got to be ready for that.”

According to Head-2-Head statistics, Borussia Dortmund have won 35% and lost 36% of its encounters against Bayer Leverkusen. Although Dortmund have won their last six home matches, leading even at half-time in the last five games, Thomas Tuchel’s side has conceded a minimum of three goals in their last five matches in all competitions.

It should be a high scoring match with Bayer Leverkusen trying to rectify their insipid start to the new season and carrying on the momentum forward from their midweek Champions League win against BATE. Borussia Dortmund will be eager to hold on to their unbeaten status and it could end in favour of the home side with 5-3 being the most probable scoreline.