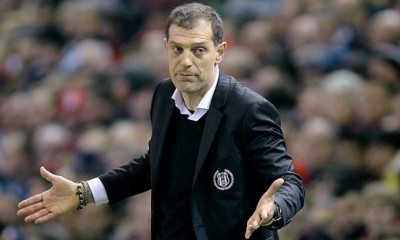 West Ham United FC have appointed Slaven Bilic as their new manager, according to a statement released earlier today on the club’s official website. The Hammers had been on the lookout for a new boss, after the London club did not offer Sam Allardyce a new contract, post their below-par performances in the second half of the 2014/15 English Premier League season.

West Ham United eventually finished at the 12th position, although Allardyce’s men flirted with European qualification for some time. Since the turn of the year, West Ham had won only thrice (against Hull City, Sunderland and Burnley) in Premier League and would have been facing a relegation battle, if not for their early season form.

The club announced its decision of Allardyce’s imminent departure, minutes after the final league match. The West Ham board had looked at a number of managerial prospect before signing on Bilic on a three year contract. Rafael Benitez, Unai Emery  and Jurgen Klopp were some of the individuals West Ham had tried to get on board. Reports about Bilic’s appointment emerged in European press last week, when the Croatian announced his resignation from the manager’s position at Besiktas. Bilic had just led the Turkish club to a third-place finish in the Turkish Super Liga.

Slaven Bilic had a brief stint with West Ham in 1996-1997 during his playing days. The former centre half’s return to Upton Park will be heavily scrutinized upon, considering he wasn’t the first choice for the job. Bilic will be West Ham’s 15th full-time manager in the club’s 120 year-old history, as the official statement pronounced.

Here is what Slaven Bilic had to say about his new role.

“I’m really glad to be back with West Ham United. It’s in the Premier League, which is among the best in the world. It’s a big challenge and you are competing with the best and what better club to do it with than West Ham.

It is a great place to play and I felt like I was at home. It is a big privilege and a big responsibility to now be manager and I hope that I will prove it to the Board, players and fans. My first priority when choosing a club is to look at its ambitions. When I spoke to the Chairmen and Karren Brady, they made clear that it is not only the fantastic new Stadium we are moving into, but they showed their determination and ambition to make what is a big club even bigger.

I would say to the West Ham fans that I will give my best and together we will achieve great things.”