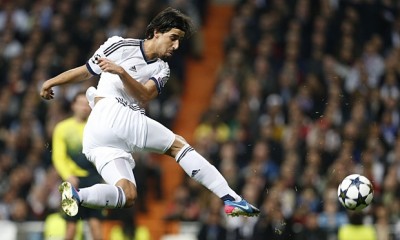 Sami Khedira has been ruled out for a period of two months, after the midfielder picked up a thigh injury on his Juventus debut.

The German international made his first appearance for the Serie A champions against Marseille on Saturday, but was stretchered off after just 25 minutes with what was initally feared to be a hamstring injury. The Juventus medical board has confirmed later that the 28-year-old has suffered a muscle tear in his right thigh and is looking at a lengthy recovery period.

Injuries have consistently plagued the German midfielder, with his former club Real Madrid even stating his constant stream of nagging injuries as the reason behind the Galacticos not offering him a contract renewal. Although Khedira stated that his health and fitness were not an issue, the recent injury indicates otherwise.

The 2014 FIFA World Cup winner, a product of the renowned Stuttgart youth academy, was dubbed to replace Arturo Vidal, who secured a move to Bayern Munich. Khedira had signed a four year contract with Juventus, after being let go by Real Madrid on a free transfer. Arturo Vidal and Andrea Pirlo’s departures have left a void in the Juventus midfield, and Massimiliano Allegri had added a player of sublime qualities in Sami Khedira.

Juventus will be concerned with Sami Khedira’s long absence, for the 2014/15 UEFA Champions League runners-up will be short of midfield depth and have to rely solely on Paul Pogba for their midfield dominance.

At this point of time, Sami Khedira is expected to feature again in October, should the recovery go as planned.