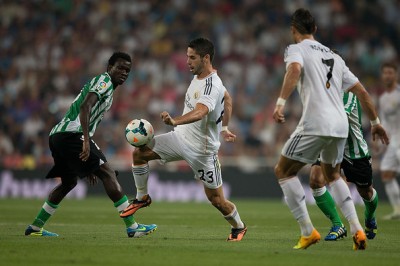 Real Madrid and Rafael Benitez will look for the first win of the 2015/16 La liga season as the Galacticos host Real Betis at Santiago Bernabeau tomorrow. Both clubs played out draws in their respective season openers. While Real Madrid finished as runners-up in the previous season, Real Betis earned promotion to the top flight after topping the Segunda Division.

Gareth Bale suffered a foot injury last week, while Karim Benzema has missed the last few weeks with a thigh injury. Although both players have been listed as doubtful and will face late fitness tests, they are likely to feature in the matchday squad, with the French centre forward poised to start.

Real Betis will miss the services of Javier Matialla and Rafael van der Vaart due to injuries.

According to Head-2-Head statistics, Real Madrid have won % of its encounters with Real Betis. The Madrid club have not only won their last five matches at home, but also have been unbeaten in 15 of the last 17 matches at Bernabeau. In eight of their last nine games against Real Betis, both clubs have been involved in a minimum of 2.5 goals. Real Betis have lost their four last away matches in La Liga and will probably add to that. In spite of both teams huffing and puffing their way to draws last week, Real Madrid should win the fixture with an easy 3-2 scoreline.