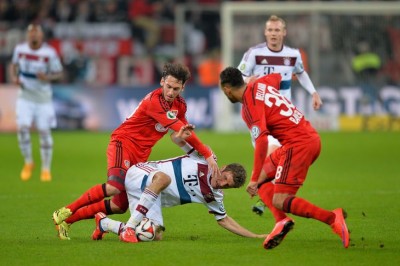 Bayern Munich take on Bayer Leverkusen in one of the most anticipated Bundesliga fixtures on Saturday. The reigning Bundesliga champions will take on a club, who according to Pep Guardiola is one of their toughest competitors this season.

Bayern have made a mixed start to the season. Although Pep Guardiola’s men put five goals past Hamburg in their season opener, injuries and suspensions could falter their title challenge. Bayern struggled to get across the line against Hoffenheim and will be wary of Leverkusen, who have made a blazing start to the new season. Roger Schmidt’s squad seems to be the most promising in recent years and their tactic of pressing when not in possession has been at the heart of their gameplay this season.

Bayern Munich’s only major injury concern is Mehdi Benatia. Jerome Boateng is suspended. Robert Lewandowski could return to the starting line-up, after coming off the bench to score against Hoffenheim.

Leverkusen have sold Heung-Min Son to Tottenham Hotspur. Roger Schmidt is likely to play an unchanged side from last week, but midfielder Kevin Krampl could make his debut at some point in the match.

Thoughts From Both Clubs

Bayer are big rivals for the Bundesliga title. Leverkusen are unique opponents. They don’t give you any time to consider. We’re going to have to let the ball do more running than our legs. They are a special team – very intense.

Hakan takes some very dangerous free-kicks so we’ve got to prevent those situations. When you have fewer players, you have fewer options, but if you want to win the Bundesliga then you need to get three points against Leverkusen.

“They are the best of the best. There is no bigger challenge than facing Bayern in the Bundesliga. But if we take our chances and make the right decisions going forward, then we can be a match for them.”

According to Head-2-Head statistics, Bayern Munich have won 58% of its matches against Leverkusen. Both clubs have made a winning start to the 2015/16 Bundesliga season, but Bayern have lost just one of their 27 competitive home games against Leverkusen till date.