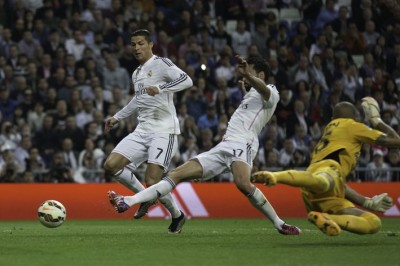 Real Madrid will host Serie A Champions Juventus at Santiago Bernabeau in the second leg of the UEFA Champions League semi-finals, as the Spanish side looks to overcome a one-goal deficit from the first leg.

Luka Modric and Alvaro Medran are the long-term absentees through injuries for the Galacticos. Toni Kroos played only 45 minutes in the weekend against Valencia and has been listed as doubtful for the crucial game, alongside Karim Benzema who is struggling to regain match fitness.

Juventus will be without the services of Kwadwo Asamoah and Martin Caceres. Paul Pogba has returned from injury and is expected to heavily feature for Allegri’s side in tomorrow’s key match-up.

Sergio Ramos is expected to drop back into the backline of Real Madrid’s 4-3-3, alongside youngster Rafael Varane. The midfield is likely to be comprised of James Rodriguez, Toni Kroos and Isco. Cristiano Ronaldo and Gareth Bale will support Karim Benzema if he starts. Otherwise, they will form a front two similar to the one in the first leg and Asier Illaramendi might come into the midfield.

The Old Lady will have all its first choice eleven at disposal and the star-studded midfield of Paul Pogba, Andrea Pirlo, Arturo Vidal and Claudio Marchisio are likely to line up in a 4-2-3-1 with Tevez and Alvaro Morata up front.

Juventus carry forward a slight advantage into the second leg, although Real Madrid clinched a crucial away goal at Turin, in the first leg. The match might end in a 1-1 draw, with Juventus progressing to the finals of the UEFA Champions League.