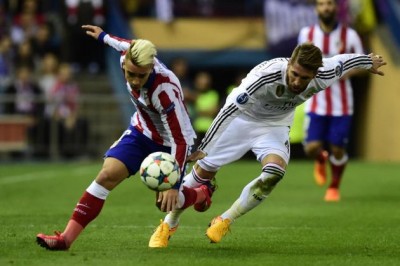 A repeat of the 2014 UEFA Champions League final will be in the cards when Real Madrid take on Atletico Madrid at Stadio San Siro in Milan on 28th May, Saturday in the final showdown of this season’s premier European competition.

Atletico Madrid are yet to get over their heart-breaking loss from two years back when Diego Simeone’s side lost to Carlo Ancelotti’s Galacticos by 4-1 after extra-time. Atletico Madrid had taken the lead in the 36th minute but Sergio Ramos equalized in the injury time, after which Real Madrid found the back of the net thrice during the extra thirty minutes after normal time.

The finals of the UEFA Champions League has been heavily Spanish flavored in the recent years with La Liga teams performing exceptionally well in the knock-out stages.

To add to the excitement of the fans, bet365 is providing a risk free In-Play bet on placing a pre-match bet on the Real Madrid vs Atletico match.

Rafael Varane has been ruled out of the UEFA Champions League finale, but Cristiano Ronaldo has declared himself fit. Diego Simeone has a completely healthy squad to choose from.

“Atlético are special opponents; they’ve beaten the two other best teams in Europe, so it will be a very difficult game. They will defend really well as they always do, but I don’t think you can say that Atlético Madrid are a team that only defends; they play good football too, and can make it difficult for their opponents. We know that, we’ll prepare for it and we’ll try to play our game so that we don’t have any regrets at the end.”

This final is going to be very fiercely contested, and very physical – it will be very tactical, but there’ll be a lot of physical effort, too. It would be a dream for me and for the team to win the trophy this time, as well as for all our fans.

According to Head-2-Head statistics, the previous six encounters between these two clubs in all competitions have resulted in three draws, two wins for Atletico and one win for Real Madrid. Atlético have won seven and lost only three of their 13 other European games against Spanish sides.

Real Madrid, on the other hand, are undefeated in 12 of their last 13 UEFA Champions League matches. Cristiano Ronaldo has sixteen goals in this season’s competition – one short of his own record for a single European Cup campaign, set in 2013/14.

It should be a closely contested battle in spite of both the clubs being polarisingly opposite in their tactical ideologies. While Real Madrid will start as favorites, a 1-1 draw after normal time is the most likely conclusion, with the match going either way should it progress to extra time or penalties.

As the UEFA Champions League finale marks the end to the 2015/16 season, bet365 will be offering their risk free In-Play bet offer to all the customers who place a pre-match bet.

To qualify for your risk free In-Play bet, simply place a bet before kick-off then, once the game starts, place another bet on any In-Play market. If your FIRST In-Play bet loses we will refund this stake, up to the same value as your largest pre-match bet (max refund $50*).

Where more than one In-Play selection is placed on the same bet slip, the risk free bet will be deemed to be the one which is first on the bet slip. All bets must be paid for and placed in the usual way and any bets that are fully or partly Cashed Out are excluded from this offer.