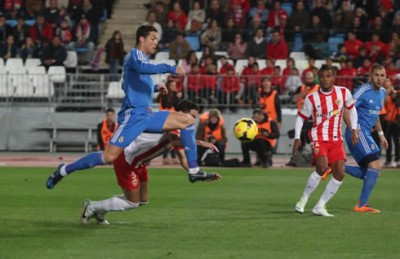 Real Madrid will host the struggling Almeria at Santiago Bernabeu this Wednesday as the battle for the La Liga title intensifies, with the Galacticos trailing the Catalans by just two points. Almeria, meanwhile, are in the bottom six of the table, struggling at the 17th position with just 31 points and not yet safe from relegation to Segunda division.

An extensive list of absentees courtesy injury and suspension is the only common aspect between both sides. Karim Benzema, Luka Modri, Gareth Bale and Alvaro Medran will miss the tie through injuries, Sergio Ramos and Daniel Carvajal are suspended due to yellow cards accumulation. The visitors will be without Fran Velez, Fernando Soriano and Michael Macedo due to injuries and Thievy Bifouma and Wellington due to suspension. Left back Sebastian Dubarbier is coming back from his ban and expected to be in the starting eleven.

Carlo Ancelotti’s side have turned up in a 4-4-2 due to the absences of Gareth Bale and Luka Modric and the trend is set to continue. While Javier Hernandez is the first choice to partner Cristiano Ronaldo up front, Rafael Varane is set to join Pepe at the heart of Madrid’s backline. The suspended Carvajal will be replaced by Alvaro Arbeola at right back. Illaramendi will keep his place in the deep midfield, with the responsibility of chance creation falling upon Isco, Toni Kroos and James Rodriguez. Tommer Hemmed is the likely targetman in Almeria’s 4-2-3-1 while Jonathan, Corona and Javier Espinosa form the attacking trio from right to left.

Almeria picked themselves out of the drop zone with two wins in the last three and will surely be pumped to force a result at Madrid’s home. However, Real Madrid have avoided defeat in the last seven consecutive matches in all competitions and are the form side. Los Blancos have not only been unbeaten at home since September last year, but the fact that Almeria have lost its last five away games will be a cause of concern for Sergi Barjuan.

Real Madrid have scored a minimum of 4 goals in its last four matches against Almeria, and they are bound to dominate possession and expected to score from a wingplay situation (one of Madrid’s many strengths).

According to Head-2-Head statistics, Almeria have lost 91% of the matches it has played against the Los Blancos. The 1×2 odds for Almeria to win is at 31.00. The most likely outcome of this match is a Real Madrid win by a 4-1 margin.