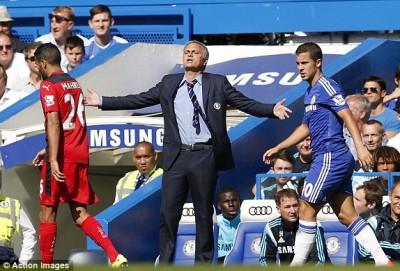 Leicester City, who have plotted a miraculous escape from the drop zone, will host the league leaders Chelsea this Wednesday. Chelsea, who already have one hand on the Premier League title, after Sunday’s draw at Arsenal, need only six more points to clinch their fifth championship.

Nigel Pearson could be without David Nugent and Jeffrey Schlupp, both of whom have been listed as doubtful for the Chelsea fixture. Jose Mourinho has his own injury concerns with Loic Remy and Diego Costa still doubtful, the former more or less ruled out from being in matchday squad. Thibaut Courtois hurt his hip after an awkward landing during the second half of the Arsenal game and could be rested today. Oscar is also a doubt after the Brazilian was taken to hospital with a concussion scare following his collision with Ospina in the weekend.

Leicester prefer a 3-5-2 with Jamie Vardy and Leonardo Ulloa up front, Wes Morgan, Robert Huth and Marcin Wasilewski in defense. Paul Konchesky and Mark Albrighton are the wingbacks tasked with providing width. In Chelsea’s usual 4-2-3-1, Petr Cech might get his first start since the League Cup win against Liverpool. Ramires might partner Nemanja Matic in deep midfield, allowing Fabregas to slot in the number 10 role, with Willian and Hazard flanking him on either side.

Leicester have won 4 consecutive matches, climbing steadily to the 17th position from rock bottom, but Chelsea could wrap up the title business at home against Crystal Palace, should they win today. The match might end in a 2-0 victory for Chelsea.