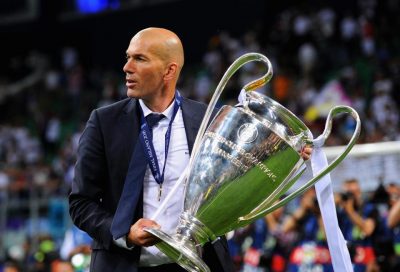 Real Madrid will face Juventus in the UEFA Champions League final on 3rd June at the Millennium Stadium in Cardiff.

Real Madrid have had an intriguing road to the finale, involving both wins and losses but just like last season, Zinedine Zidane has led the Madridistas to their second consecutive Champions League final.

In all the glorious history of Europe’s premier competition, never have the defending champions managed to retain the UEFA Champions League title. Real Madrid have not only been fighting history, but also a series of deserving contenders in other top European clubs, all of whom strengthened in the pre-season transfer window.

Real Madrid were drawn in Group F alongside Borussia Dortmund, Legia Warszawa and Sporting CP in the group stages. Three draws among their six matches, including 2-2 draws against Borussia Dortmund in both legs meant the Spanish club didn’t finish top of the group.

Twelve points in the group stage led Real Madrid to face Napoli in the Round of 16, when they defeated the Italian club 3-1 in both legs to set up a meeting with Bayern Munich in the quarter-finals.

Real Madrid were the dominant side when the two clubs faced each other at the Allianz Arena in the first leg, but Cristiano Ronaldo and co. could manage a 2-1 win only. Their lack of precision in front of the goal would come back to haunt them in the second leg when Bayern Munich put up an incredible performance, yet lost 4-2 after extra time when Cristiano Ronaldo completed a hattrick in the extra time after the scoreline was 1-2 against Real Madrid.

The win, as controversial as it was, set Real Madrid up for the infamous Madrid derby in the quarter-final. Zinedine Zidane’s tactics and his trump card Isco bedazzled Diego Simeone’s side who surrendered to a 3-0 defeat at Santiago Bernabeu. Atletico Madrid reversed the result in the second leg with a 2-1 win but it was not enough to stop Real Madrid from qualifying for the finals.

A tough encounter awaits Real Madrid in the finals but the sheer talent in this squad and the tactical guile of Zinedine Zidane make them the first realistic candidates to retain the UEFA Champions League title.