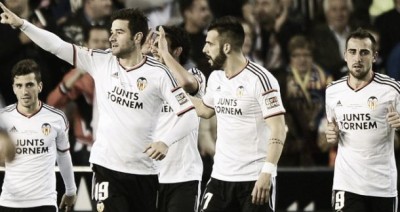 The La Liga kicks off this weekend with Rayo Vallecano welcoming Valencia to Campo de Futbal de Vallecas. Rayo Vallecano finished at 11th position with 49 points in the 2014/15 domestic campaign while Valencia finished at 4th, earning eligibility for the UEFA Champions League qualifiers.

Rayo Vallecano will be without the services of injured Luis Farina (hip), Christian Alvarez (muscle), Tito (thigh) and Adrian Embarba (foot). Valencia have a few injury concerns of their own with Diego Alves and Andre Gomes ruled out of the fixture. In addition, Jose Gaya, Daniel Parejo and Sofiane Feghouli are suspended.

Rayo Vallecano is expected to lineup in a 4-2-3-1, while Valencia will play their manager Nuno’s preferred 4-3-3 formation.

Rayo Vallecano have had a transfer window similar to previous years, with the club seeing a high turnover of players. Patrick Ebert (returning from loan) and Bebe (who is on loan) should feature heavily in the season opener. Manucho will also have a lot of responsibility to score goals, especially with Alberto Bueno’s departure this summer.

Valencia will miss Diego Alves through a long-term injury (ACL tear), which will see Matt Ryan making his La Liga debut. Nuno’s side will be without Nicolas Otamendi who signed for Manchester City earlier this week and Ruben Vezo must step up to fill the space left behind by the Argentine.

According to Head-2-Head statistics, Rayo Vallecano have won less than 21% of its matches against Valencia, conceding 54 goals in the process. Valencia are the likely winners in this encounter, with a 2-1 scoreline.

To assist the Punters during the upcoming La Liga season, bet365 offers a variety of betting options, especially suited to the choices of the customers.

bet365 has secured the rights to provide Live Streaming of every Spain La Liga match for the 2015-16 season. However, the online streaming will not be available for customers in Spain or the Middle East and North Africa (MENA).

Bore Draw Money Back is an extremely popular choice for bet365 customers. Place a pre-match bet on ANY of bet365’s Correct Score, Half-Time/Full-Time or Scorecast markets for ANY Soccer match, and if the game finishes 0-0, your stake will be refunded if your bet loses. Open an account with bet365 today and claim your 100% Deposit Bonus.