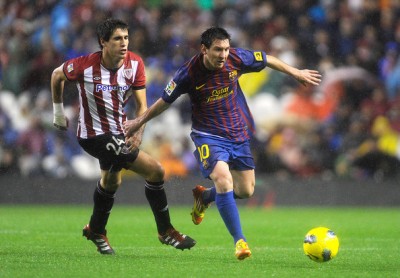 Barcelona will kick off their 2015/16 La Liga campaign at San Mamés Stadium against Athletic Club Bilbao on Sunday. The Primera Division defending champions will return to the venue where they were humiliated to a 4-0 defeat in the first leg of the Spanish Super Cup by the same Athletic Bilbao side less than two weeks ago.

Athletic Club Bilbao’s squad is severely depleted with Jonas Ramalho, Inaki Williams and Iker Muniain absent through injuries. Kike Sola is suspended while Balenziaga, Etxeita, San Jose and Iturraspe also listed as doubtful. For Barcelona, Neymar, Adriano and Douglas are injured. Both of Barcelona’s first choice centre halves Gerard Pique and Jeremy Mathieu will miss the game due to suspensions. Jordi Alba faces a late fitness test, but is expected to start.

According to Head-2-Head statistics, Barcelona have won 62% of its matches against Athletic Bilbao till date. The Catalan club are missing a number of key players through injuries and suspensions, but have enough quality to see of an equally injury-riddled opposition. While Barcelona have won 9 of their last 10 away matches in La Liga, Athletic Club Bilbao have won 8 of their last home matches in the competition. Although Barcelona lost by a considerable margin at the same venue against the same time a few days ago, the La Liga is a different ball-game and Barcelona should prevail with a 2-1 scoreline.

To assist the Punters during the upcoming La Liga season, bet365 offers a variety of betting options, especially suited to the choices of the customers.

bet365 has secured the rights to provide Live Streaming of every Spain La Liga match for the 2015-16 season. However, the online streaming will not be available for customers in Spain or the Middle East and North Africa (MENA).

Bore Draw Money Back is an extremely popular choice for bet365 customers. Place a pre-match bet on ANY of bet365′s Correct Score, Half-Time/Full-Time or Scorecast markets for ANY Soccer match, and if the game finishes 0-0, your stake will be refunded if your bet loses. Open an account with bet365 today and claim your 100% Deposit Bonus.