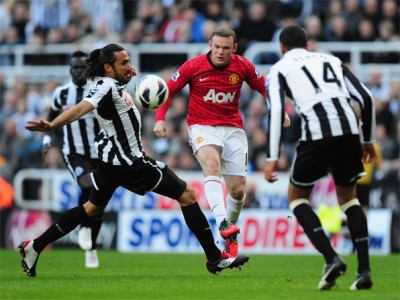 Manchester United host Newcastle United at Old Trafford as Louis Van Gaal’s side look to consolidate their winning start to the new English Premier League season. Manchester United have had a disappointing week in the transfer market with two of their transfer targets Pedro and Nicolas Otamendi signing for Chelsea and Manchester City respectively. The Red Devils must put up a good performance on pitch to assure the fans that their work behind the scenes this summer hasn’t been undone by a bad week in the transfer market.

Newcastle United will enter the match with just one point off the first two games and it would be an extremely difficult task for the Toons to add to their points tally this weekend, with Newcastle having won only once at the Old Trafford in the Premier League era.

Manchester United have a few injury concerns with Phil Jones suffering from illness and Michael Carrick limping off the pitch during United’s UEFA Champions League qualifier against Club Brugge. Marouanne Fellaini will be serving the last of his three-game suspension which carried over from last season. David de Gea and Victor Valdes will not be a part of the matchday squad as well, with both goalkeepers being frozen out of the first team.

Newcastle United will be missing the services of Paul Dummett, Emmanuel Riviere, Sylvain Marveaux, Curtis Good an Steven Taylor due to injuries. Daryl Janmaat is suspended. Moussa Sissoko and Siem de Jong have been listed as doubtful as well. New signing Thauvin is likely to be included in the matchday squad, but may not feature in the starting line-up.

Steven McLaren’s side have an uphill task, especially after their 2-0 drubbing at the hands of Swansea City last week. Manchester United may not have settled as a squad, but are showing sparks of brilliance, especially the two new signings Memphis Depay and Matteo Darmian looking comfortable in the Premier League.

According to Head-2-Head statistics, Manchester United have won 70% of its matches against Newcastle United till date. Louis van Gaal’s side are likely to win this one as well, by a 2-0 scoreline.