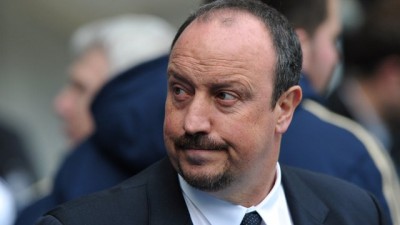 Rafael Benitez has been widely tipped to take over the vacant managerial position at Real Madrid at the end of the season and it seems only a matter of time before the former Real Madrid youth player takes over as one of the most high-profile managers in Europe.

Real Madrid’s Vice President Fernandez de Blas accidentally let it slip to a section of Madrid fans in a meeting with supporters’ group that Benitez will be joining Real Madrid CF as its manager next week. De Blas also appreciated Carlo Ancelotti for his achievements while in the Spanish capital.

Carlo Ancelotti’s agent had said to the European press that Rafa Benitez was 99% certain to be the new Real Madrid boss, after the news of the Italian’s sacking was confirmed. Rafael Benitez also informed the world about his departure from Napoli earlier this week with the Napoli president in tow, as he expressed his gratitude to the fans of the Serie A club for their support and encouragement.

Rafa Benitez began his managerial career at Real Madrid Castilla in 1993. After a few stints at Real Valladolid, Osasuna, Extremadura and Tenerife, Benitez became the manager of Valencia in 2001. He won two La Liga titles with Valencia in 2001/02 and 2003/04. Benitez’s fluid attacking play received widespread adulation as Valencia also won the UEFA Cup. Soon after Benitez resigned from Valencia due to a disagreement of opinion with the club president and took charge of Liverpool. Benitez saw over one of the most successful periods for Liverpool in the current century and also led them to a UEFA Champions League title. After yet another falling out with Liverpool’s owners, Benitez had brief stints at Inter Milan and Chelsea leading these two clubs to a Club World Cup and Europa League respectively. Benitez joined Napoli in 2013.

Rafa Benitez, through renowned for his tactical acumen, has often been found lacking in the man-management aspect. His relationship with fellow managers and even supporters of his own club have been tumultuous in past. With Benitez, Real Madrid will be getting a manager who is fully adept in the club’s culture, is tactically astute and has the record of winning trophies in his curriculum vitae.

Florentino Perez, the Real Madrid President reportedly has a good working relationship with Benitez, one which will be pivotal if Real Madrid has to reclaim La Liga. Rafael Benitez will have huge shoes to fill, after Ancelotti’s La Decima-winning season at Madrid, but the Spaniard has the means to do it.