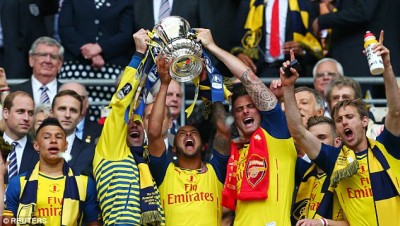 Arsenal dealt Aston Villa a crushing blow with a 4-0 victory to lift their 12th FA Cup title. Arsene Wenger’s men not only successfully defended the FA Cup, but did so in style as Sanchez and co. displayed an exquisite brand of football.

Aston Villa, who have had an amazing turnaround since Tim Sherwood took over at the Villa Park, were thoroughly outplayed on all fronts as their own performance was reminiscent of Paul Lambert’s days.

Arsene Wenger started Theo Walcott up front instead of Olivier Giroud as the Englishman had been riding a wave of confidence after his hattrick last week. Alexis Sanchez, Mesut Ozil and Aaron Ramsey took up their usual positions in the attacking band while Francis Coquelin and Santi Cazorla featured in the deep midfield.

Arsenal were on the offensive right from the outset and attacked in waves, with even the fullbacks Nacho Monreal and Hector Bellerin overlapping, to provide width and join the attack. The Villa players looked confused and lost for answers as Arsenal created chances in numbers while the Villa defense held on by a bare thread. It was only a matter of time before the Gunners took the lead. The fact that it took Walcott to open the scoring over 40 minutes was down to Arsenal’s wastefulness in the box and Shay Given’s reflexes. The Villa goalkeeper was responsible for the scoreline remaining a respectable one for Sherwood’s team.

Arsenal went into the half time looking every bit the team Wenger has managed in the second half of the season and began the second period of 45 minutes in equal stride. Alexis Sanchez scored a beauty from long range to seal Villa’s fate minutes into the second half and the Gunners took an unassailable 3-0 lead through Per Mertesacker’s header just after the hour-mark. Villa never looked like troubling the Arsenal backline with Wozjiech Szcezny having a quiet evening, although they had two soft shouts for penalties turned down by the referee.

It was a cumulative failure from the entire Villa side. The defense had no answers to Arsenal’s pace and guile, the midfield shockingly crumbled under pressure with Delph and Cleverley getting booked early into the match. Jack Grealish looked less of the prodigy Time Sherwood promoted and more of the teenager he is, while Christian Benteke cut a lone figure up front.

Olivier Giroud’s goal in stoppage time was the proverbial nail on Villa’s coffin. As Arsene Wenger and Arsenal celebrated another successful FA Cup campaign, Tim Sherwood cut a sorry figure with a huge task to rebuild the Aston Villa side ahead of the new Premier League season.