Portugal To Face Sweden In UEFA Euro U21 Finals 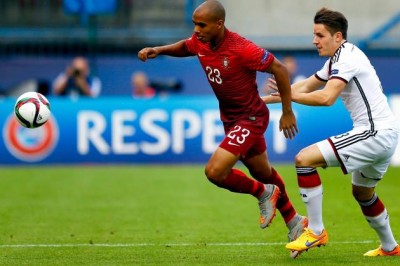 Portugal and Sweden stormed to the finals of the 2015 UEFA Euro U21 championship after convincing displays against Germany and Denmark respectively.

Rui Jorge’s Porutgal stunned Horst Hrubesch’s Germany, inflicting their heaviest defeat at this level in a 5-0 encounter. Portugal set the tone of the match, early into the first half when Sérgio Oliveira’s shot hit the post after he was set up by Ricardo, post an exhilarating piece of play from the highly rated Bernardo Silva and William Carvalho.

Bernardo soon gave Portugal the lead, after a quick one-two with Ivan Cavaleiro, as the Monaco playmaker found space behind the German defense and Julian Korb especially. Bernardo was heavily involved in the second goal as well, with Ricardo scoring from his corner. Ivan Cavaleiro extended the lead to 3-0 at half-time. Germany briefly threatened in between Portugal’s second and third goals as Joshua Kimmich’s shot was blocked by José Sá and Nico Schulz put the rebound wide off mark.

Even Max Meyer’s inclusion at half-time couldn’t change Germany’s fortunes as João Mário scored again within 50 seconds of restart of play. Ricardo Horta tapped in a fifth goal, completing the humiliation for the young German internationals who lost after being unbeaten for 14 consecutive games. Germany’s Leonardo Bittencourt was sent off late into the second half, to cap off a forgetful night. It was a masterful display from Portugal as they all but annihilated Germany.

Sweden also made it through to their second UEFA Euro U21 final, after beating Nordic neighbours Denmark in a 4-1 affair. Denmark had the upper hand in the match for the first twenty minutes or so, but the Swedes soaked up the entire pressure, before replying with two goals of their own, within four first-half minutes.

John Guidetti put up a spirited first half display as he scored Sweden’s first and set up the second. He slotted in a calm penalty, in front of the Danish contingency of fans, after Alexander Scholz had fouled Isaac Kiese Thelin. He set up Tibbling’s goal minutes later, with a brilliant counter-attacking run through the Danish defense. As has been the case with these two teams in the qualifying round, the second half provided some drama with Bech’s goal in the 63rd minute allowing Denmark the possibility to come back into the tie. Denmark increased the pressure once again, looking for an equalizer, but Sweden pulled away with Quaison’s strike, before a stoppage time goal from Oscar Hiljemark added onto the celebrations.

Portugal and Sweden will face each other in the finals on 30th June, 2015 (Tuesday) at Eden Stadium in Prague, Czech Republic.