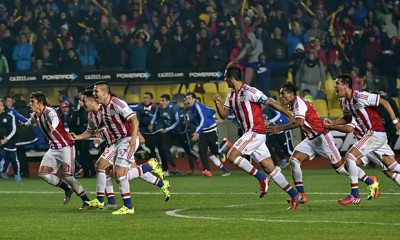 Brazil, who have produced lacklustre displays all through the summer, especially after Neymar’s suspension, were wasteful and disillusioned with the ball last night and paid the ultimate price for it. Robinho put his side ahead midway into the first half after Liverpool’s latest acquisition, Roberto Firmino got on the other side of a Dani Alves cross and set up the former Manchester City striker for a simple finish. It turned out those was the only clear-cut chance Brazil would create in the entire period of ninety minutes.

Brazil took their pedal off the gas post the goal, as Paraguay enjoyed comfort in possession and were not pressurized at all. Although Willian provided an occasional burst of energy down the flanks, the absence of Neymar (suspended) and Oscar (injured before the tournament) showed in Brazil’s play. Dunga’s side looked to be lacking in ideas and implementation.

Twenty-six minutes into the second half, Thiago Silva handled the ball within his own penalty area as he challenged Paraguay’s Roque de Santa Cruz for a header. Gonzalez netted from the spot and Paraguay deservedly got back into the game.

Paraguay were written off by most before the match, but they once again showed the resolve to get back into the game after conceding. The losing finalist of the last Copa America will now face Argentina in the second semi-final on Tuesday.